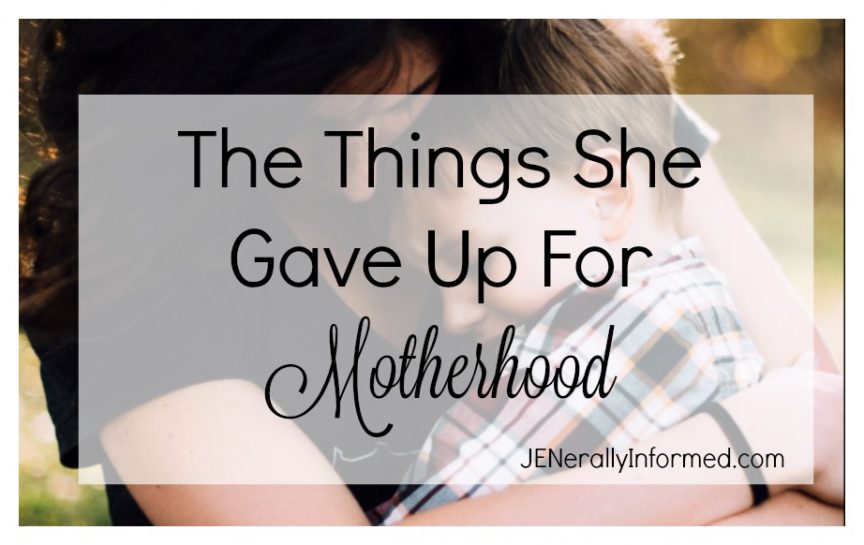 A few nights ago I was putting my 9 year old daughter Rebekah to bed. As we lay snuggled up under her sheets talking about the day she asked me if I liked being a mother? That was an easy question to answer and I told her yes I did. She then asked me if I had always wanted to be a mother? The answer was again yes, being a mother was something I had always wanted to be.

She paused for a moment and then asked me the following sincere question, “Mom there are so many things you could have been. Are you sad that you gave all of those other things up to be a mother?”

As her sweet little blue eyes peered over at me so many thoughts ran through my head. Almost too many to even say or adequately formulate an answer.

What had I given up to be a mother? It was a good question and I quickly thought of a few things that had significantly changed since becoming a mother. 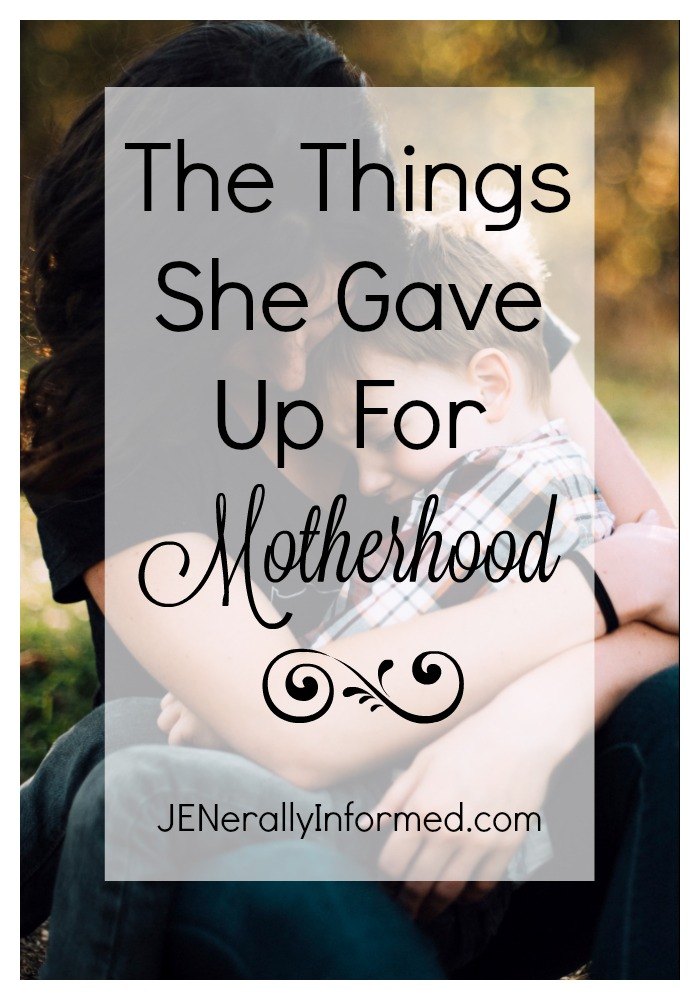 Obviously, due to four cesarean sections, my body will never be the same. I am healthy and I feel comfortable in my skin, but at times when I bend too sharply my incision scar reminds me that there are limits to what this body of mine can do. And there are definitely clothes I will never feel comfortable wearing again!

I thought about all of the sleep I have lost over the years as I tended to sick children. Or as I sat awake filled with worry and concern for those same children. Losing sleep seems to be an almost inherent part of motherhood.

Professionally. I am a fairly adept PR consultant, but in order to raise my family over the years I have had to say no to certain opportunities that just would not work well with my role as a mother. Perhaps some may consider it an under utilization of skills that I did so, and there are many jobs I know I could have done and done them well, but to me my most important role has always been that of a mother.

Time. It races past and sometimes it goes so very slowly. I of course understand that we never really own time, but as a mother to 4 children I know that my time is never truly my own. Plans go awry, things change, bumps happen. Children grow. Sometimes I lose time, and sometimes it is on my side. I sit here typing this post as an almost 40 year old mother to 4, but it seems like only a mere blink ago I was a 24 year old woman holding her first baby girl in her arms. That’s how time passes. So perhaps it is safe to say I have given up quite a bit of time as a mother?

Most importantly, since motherhood I know I will never have a day where my thoughts are completely my own. Both my heart and thoughts always seem to veer back to my children. As a young adolescent and even young adult you are ill prepared for how much “thought power” goes into the raising of children. We as mothers, think about our children, and then we think some more. The old adage that you are never very far from your mother’s heart and thoughts is so very true.

After all of these various things had raced through my head, I looked over at my 9 year old daughter and asked her a question.

She replied by hugging me and saying, “Yes. Very much.”

Her response indicated it had been a “good mommy day” and so we talked about how being a mommy is hard work and that is why sometimes I make mistakes. Quite a lot of them, but love is the most important part of motherhood. Mothers do what they do because of love, and to love someone as much as a mother loves her children is not a hard thing or a sacrifice. It is a gift.

As a mother, yes it could be argued that there are indeed a great many “things” I have given up in order to do that role, but a much wiser person than I once said, “The most important things in life aren’t things.”

So in the end, I guess all of those things I gave up in order to be a mother just won’t matter. All bodies age, all lives are spent in pursuit of one thing or another, but to say that as a mother, I filled my days, years and large portions of my life with the love and care for those within my charge is not something to be sad about. That love has already been returned to me many times over, and it will continue to be returned, because anything I gave up a long the way in order to gain know, and have that love really didn’t matter anyways.

The things she gave up for motherhood. #mother #parenting #kids