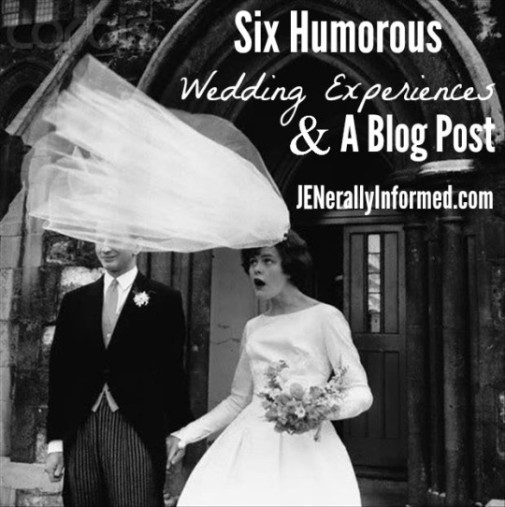 One night last week, my brain started thinking about weddings, because to date, I believe I have attended literally hundreds of weddings and receptions. On this particular night I began to specifically think about some of the most humorous and funny experiences I have had as a wedding guest and as I sat giggling, I realized they are just too good not to share!

Now don’t call me callus and cold, because I think when you read some of these you are going to laugh out loud too. So come along as I share six of my seriously funny wedding experiences! 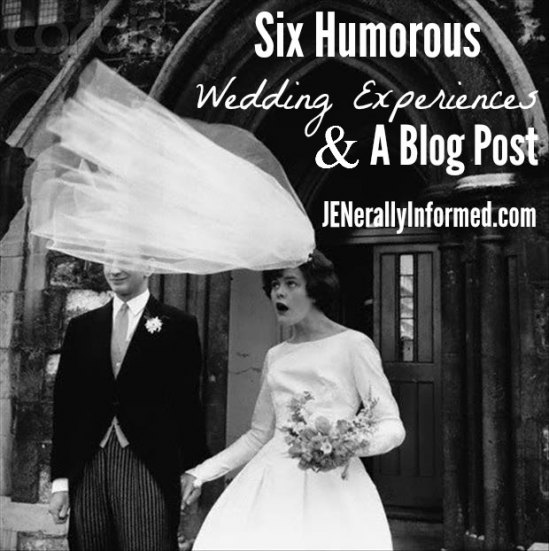 I was 4 and it was my sister’s wedding. I was her bridesmaid and wore the cutest little red dress ever! I still have the dress and my daughters wear it for dress-up! 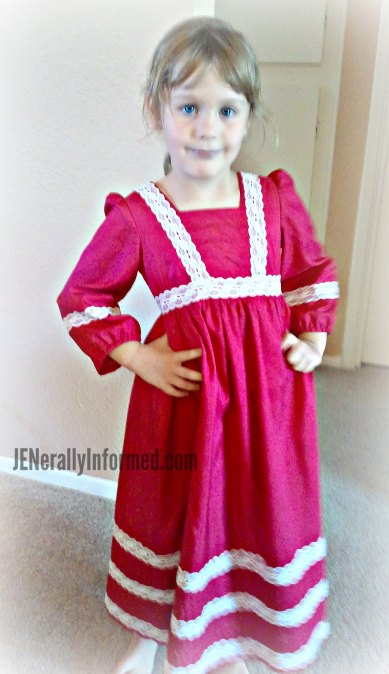 Anyways, the wedding reception was at a nice community clubhouse area. There was a pool and a large contingent of my young and frolicking Hispanic cousins. You see where I am going here right?

Inevitably, my cousin who was about 7 at the time lost her balance and fell into the hot tub. The hot tub was maybe 4 feet deep and her feet could easily touch the bottom with her head sticking out, but one of my adult cousins not to be deterred in his fantastic attempts at a display of heroic chivalry, jumped fully dressed in a suit and tie into the hot tub to “rescue” her.  I was too young to realize if the move worked to attract the ladies.

So how about that time I was eight and got drunk at a wedding? There was this really delicious “tropical” punch and, well, perhaps about 10 cups later I was solidly drunk for the first and last time in my life. It definitely left an impression. People said that I was fairly exuberant in my dancing that night. My husband just asked if that is why I never danced again? He fails to realize that the dog house is NOT air conditioned.

After Jen’s Guy and I were married we continued the wedding reception circuit together. This next wedding reception I am going talk about was for an acquaintance from College. After greeting, hugging and congratulating the couple we went to the refreshment table and upon arrival noticed that all of the food on the table had signs attached to each dish with the following message, “Please take ONLY one!” We felt kind of bad taking even one, so we grabbed a glass of punch, dropped off our present and then headed straight for the door for The Golden Corral which doesn’t limit your roll eating!

At one reception, Jen’s Guy and I sat at a table, and in order to be polite and friendly started a conversation with the man seated next to us. It turns out the man we were talking with was the Groom’s father. We of course told the father the reception was very lovely and the couple looked so happy. The father nodded and looked at us and happily reported that the best thing about the whole wedding was that he “hadn’t had to do a damn thing to help!”  Well alrighty then! Glad he was proud of that accomplishment!

At another reception for a College friend, we of course again made the obligatory trip to the refreshment table. After our last experience with the “Please take ONLY one!” signs we were hesitant, but luckily there were nut cups and punch, and both were plentiful. So we each grabbed a cup of punch and a small but decorative cup of nuts and sat down to catch up with a few other friends. A few minutes later, the Bride came by and asked us if we had gotten enough to eat. The hubs looked down at his lone nut cup, looked up at her and smiled. I kicked his shins under the table before he said something. After she left he whispered, “Do you think someone would notice if I stood there dumping the little nut cups into this punch cup?  It might take 3 of these to get full!”  All jokes aside, he likes nut cups, except almonds.  He has allergies. . .

This one literally takes the cake and that is why it tops out at number one on the list.

At my first job right out of College I was invited to the reception of one of my co-workers. It was to be a dinner style reception with traditional Latin American food. That sounded interesting, except that when we arrived at the reception the Groom was there, but the Bride was not. We were not the only ones to query him about her lack of appearance and the Groom was as baffled by her absence as the rest of us were. He said that he had seen her at the wedding that morning, but had lost track of her in the afternoon….

A very long hour went by with her still not in attendance at her own wedding reception. Finally we began to hear shouts from the hall and the Bride came running in. She looked frazzled and I noticed what appeared to be a long white smudge across her cheek. She announced loudly that she was sorry to be so late, but that the friend responsible for frosting and decorating her wedding cake had dropped the cake off right before the reception with the apology that she had been unable to frost it. So the Bride quickly took matters into her own hands and frosted and decorated the wedding cake on her own and by herself.

The fact that, #1 The Groom lost track of her right after the wedding and #2 She would feel uncomfortable asking him for assistance in this circumstance didn’t leave us hopeful about their future, but hey, young love!

Six humorous stories about weddings you won’t want to miss

Do you have any humorous and funny wedding stories? I would love to hear them!