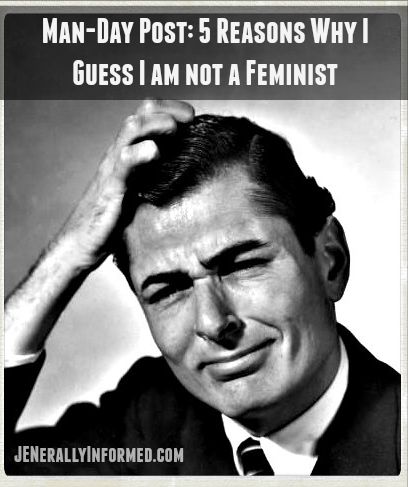 Welcome to another installment of Man-day from Jen’s husband Jen’s Guy.

Breaking News-  I am fairly certain that the male “feminist” movement has left me behind. I mean I never came out and referred to myself as a “feminist,” but then again, I never would have rejected the label. New revelations have shown me that I have been firmly excluded from that fellowship. Here is the overwhelming evidence. . . 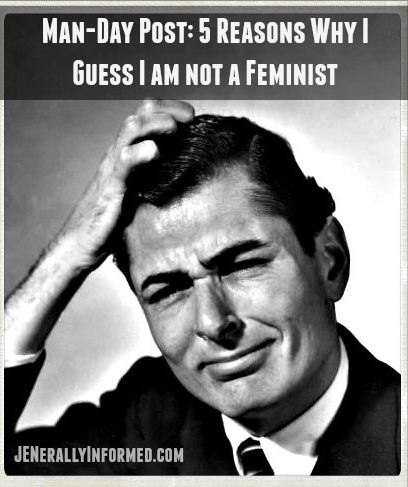 1.  Apparently, not enthusiastically handling childcare duties while my wife is out with a dude named Paulo, is a problem.

As I write this, my children are asleep in their room, Loretta Lynn is on the stereo, and my wife is out on a date with a man named Paulo. It’s her second date this week; her fourth this month so far. If it goes like the others, she’ll come home in the middle of the night, crawl into bed beside me, and tell me all about how she and Paulo had sex. I won’t explode with anger or seethe with resentment. I’ll tell her it’s a hot story and I’m glad she had fun. It’s hot because she’s excited, and I’m glad because I’m a feminist.

First of all, I’m calling shenanigans. Not because of the story itself, I never underestimate a man’s ability to be stupid. I am almost certain, however, that a dude like that could not appreciate Loretta Lynn.

When my wife told me she wanted to open our marriage and take other lovers, she wasn’t rejecting me, she was embracing herself. When I understood that, I finally became a feminist.

No, I think what you did here is to become a doormat and babysitter while your wife is out looking for something better. I guarantee that the guys that she is with aren’t looking to be “feminists.”  He does state that he is “allowed” to go out himself, but he rarely takes the opportunity.  I’ll bet the line to get some of THAT isn’t terribly long.

2.  I probably touch my wife’s butt way more than I should.

It’s not like I grope her like a Viking Warrior in a seedy dive bar, but yeah, it is an issue, and to be honest, I’m not all that sorry about it. 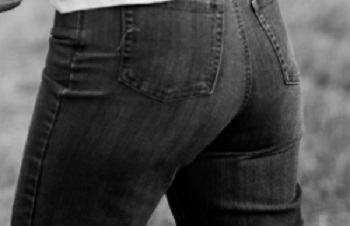 Be honest, there are some of you out there that kinda want to touch her butt too.  . . You can put your hand down right now, Paulo! 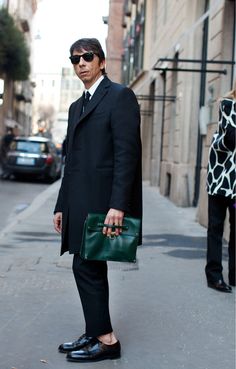 And I’m going to judge guys that do.

You may think that this wouldn’t matter either way, but evidently. . . (from Slate, obviously)

I hate how much I love to grill. It’s not that I’m inclined to vegetarianism or that I otherwise object to the practice itself. But I’m uncomfortable with the pleasure I take in something so conventionally masculine. Looming over the coals, tongs in hand, I feel estranged from myself, recast in the role of suburban dad. At such moments, I get the sense that I’ve fallen into a societal trap, one that reaffirms gender roles I’ve spent years trying to undo. The whole business feels retrograde, a relic of some earlier, less inclusive era.

Proud suburban dad here. Seriously dude, just sod off. It feels “retrograde” because you suck at it. Watch any of the Food Network shows based on grilling and barbeque and you will find BOTH sexes equally represented. The connotations of unbridled masculinity is the baggage YOU bring into the equation.

Significantly, the notion that grilling is a manly thing for very, very manly men is far from universal. In an article for Forbes, Meghan Casserly proposes that men like to grill because it’s dangerous and because they don’t have to clean up afterward. Yet “women preside over the grill” in much of the world. Though many claim that men grill because they’re somehow drawn to fire, presumably by some atavistic impulse carried in our chromosomes, the masculine connotations of grilling are culturally specific, and hence culturally constructed.

Or, it could be the fact that it is generally 110 outside during the summer and my wife knows better than to place herself over a hot grill just to prove she supports gender neutral roles. Also, if a guy “doesn’t clean up afterwards,” don’t eat food from his grill. I’m not emasculated because I use an infrared grill that uses indirect heat and hides the flame almost completely. Fake suburban dad guy and his Bro-cialist buddies would probably burn themselves and the meat with it.

5.  I’m not choosing between being a scoundrel or a slave.

From the good folks at The Baffler:

Feminism is going to make it possible for the first time for men to be free.

At present the ordinary man has the choice between being a slave and a scoundrel. That’s about the way it stands.

For the ordinary man is prone to fall in love and marry and have children. Also the ordinary man frequently has a mother. He wants to see them all taken care of, since they are unable to take care of themselves. Only if he has them to think about, he is not free.

A free man is a man who is ready to throw up his job whenever he feels like it. Whether he is a bricklayer who wants to go out on a sympathetic strike, or a poet who wants to quit writing drivel for the magazines, if he doesn’t do what he wants to do, he is not free. . . .

Look, the word “ordinary” doesn’t mean what you think it does. Show me the men that work hard to provide for their family, show me the men stepping up to take responsibility.  Indeed, more men are  taking the “Feminism” road (if that is what you want to call it) and the results are more strife, more poverty, and less happiness than ever before.

Men AND women don’t often find happiness striking off on their own. Whether it is spending time with a significant other, starting a family, or joining a community, there are sacrifices and responsibilities involved.  Shedding those responsibilities on a whim is not the royal road to personal completion. It is the satisfaction of acquiring and sharing responsibilities that grow society, especially when done voluntarily.

In short, they are afraid that they will cease to be sultans in little monogamic harems. But the world doesn’t want sultans. It wants men who can call their souls their own. And that is what feminism is going to do for men—give them back their souls, so that they can risk them fearlessly in the adventure of life. . . .

In conclusion, I understand that there are a lot of Feminists that will say, “That isn’t anything like what I believe!” Yep, I’m right there with you. I’m just going to do the best I can to have a relationship with my wife and three daughters that doesn’t require me becoming more like them or them becoming more like me.  I want us all to love one another the way we are, because of the way we are. That may mean enjoying traditional roles like grilling, baking, jam making, Waylan Jennings listening, or some occasional butt pinching. Generally it means taking on NEW challenges together and expanding both our capabilities and horizons.

Additionally, I am raising strong girls who don’t suffer fools and realize there is nothing that they can’t accomplish. I’ve taught them that their dreams are entirely up to them, and that society, and more especially pop culture, can’t make those choices for them. There is no part of that which SHOULD be incompatible with Feminism, and I hope that logic and love will win out in the end.