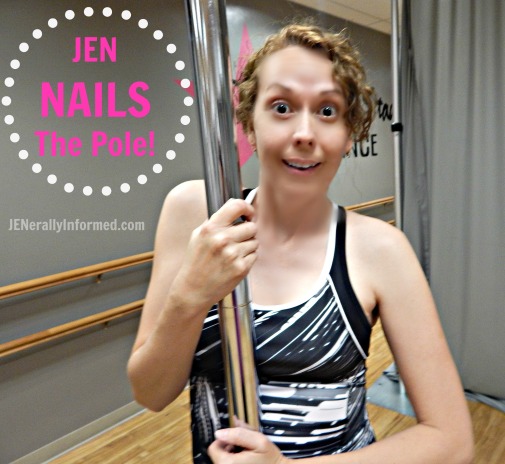 It has been a while since I have done a “Jen Nails IT! Pinterest Challenge.”

This new challenge was inspired by a friend. I have known her just about all of my life. I go to church with her, and I know every member of her original and current family. She owns a dance studio and has been very successful at teaching many people and children (especially my children) how to dance. 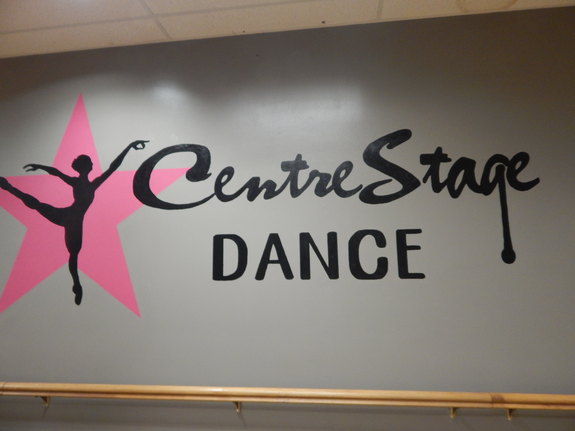 I, myself, have never taken her up on her offers to get me into her studio. Until now. And I didn’t just go halfway because I know my readers demand more.

So on Friday night I signed up for a special little class called Pole Fitness! 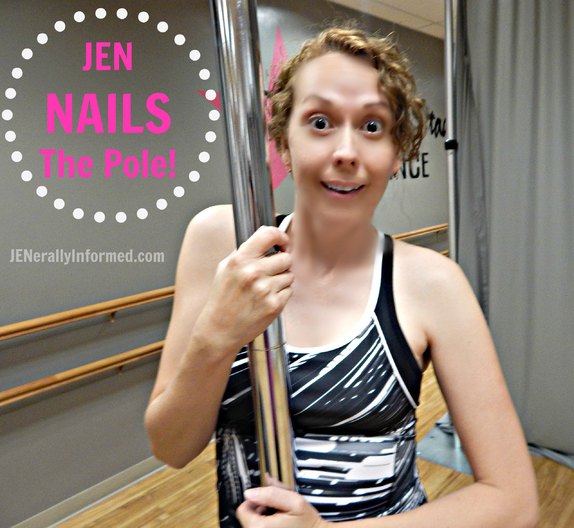 Check out when a thirty something #mom tries #polefitness #nailedit @queenmomjen

First off, I need to clarify that the majority of my current exercise regimen includes, but is not limited to, carting the vacuum cleaner up and down the stairs and hefting a 22 lb toddler with me everywhere I go. So, at this stage of the game I am not even remotely a lean mean fighting machine.

I had the date for this class set for a while and had to reschedule once because of sick kids. On the day of the class, I started to think about what this was going to entail and realized I wasn’t really prepared. In a panic, I asked Jen’s Guy “What do I wear to this class?”

Jen’s Guy- “Honey, my understanding is that “wearing something” isn’t really a big requirement.”

And at that point Jen’s Guy was removed from having anything to do with the project.

I figured a pair of gym shorts and workout tank would do. Jen’s Guy kept his comments to himself (OK, I just stopped listening.)

On the night of the class I also realized I had to take someone with me to photograph it and Jen’s Guy had already been banned! Seriously, can you imagine? So as a good mother I took along my 13 year old daughter.

Here she is working the pole like a champ! With constant, non-free range supervision of course. 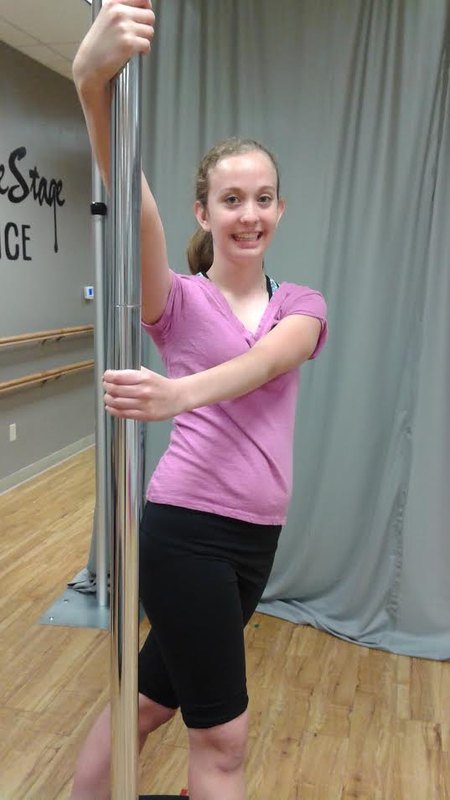 Now onto the class!

Katrina started us off by detailing a little about pole fitness. She explained that a lot of people have a mindset that doing this is all about being sexy when really it is about being graceful.

But then I turned it into:

So, we began warm-ups and instantly I could feel how incredibly out of shape my core was. Even just lifting my legs above my head and holding onto the pole was challenging!

Katrina led us through a series of basic pole moves. For example we learned “the chair,” where you lift your legs off of the ground and imitate sitting while swinging on the pole. It took me about 20 tries, but I did it! I swung my bad self while sitting around that pole and have never felt so proud in my life!

* Note to Jen’s Guy here- I did learn that skin to pole contact is better, because when clothes touch the bar you slip like buttered spaghetti. . .

Anyway, there were a few other moves she taught me that I was less than successful at, but at least I had fun trying them and didn’t break any major bones. Winning!

Katrina then had me learn and practice a dance routine that her other class would be performing. I learned the first 5 minutes of the routine and even got off of the ground and was swinging on the pole!! Hooray me!

Then she asked if I would like to see the rest of the routine and feeling like a pro I figured I could rock that routine…….

Until it included THIS: 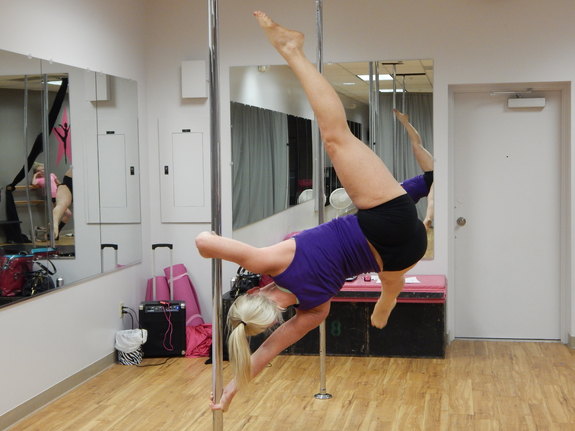 So, at that point I resigned myself, probably semi-permanently, in the kiddie pool until further training ensued. I do have to say the whole experience was a blast! I did NAIL a few of the moves, had fun and felt darn good during the process! So for any of you considering taking a Pole fitness class I say DO IT!!

If you are in Tucson,what are you waiting for? Katrina is amazing and I now believe she possesses super-hero like powers, so you will love taking a class from her. You can click here to find out more! 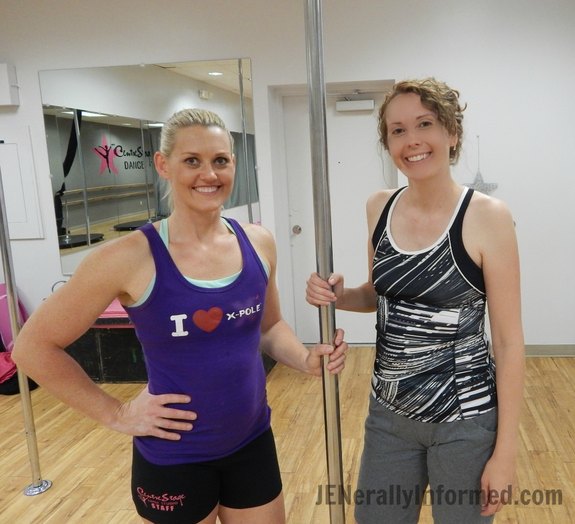 So did I NAIL this? Yes, maybe, I don’t know. How about you be the judge. 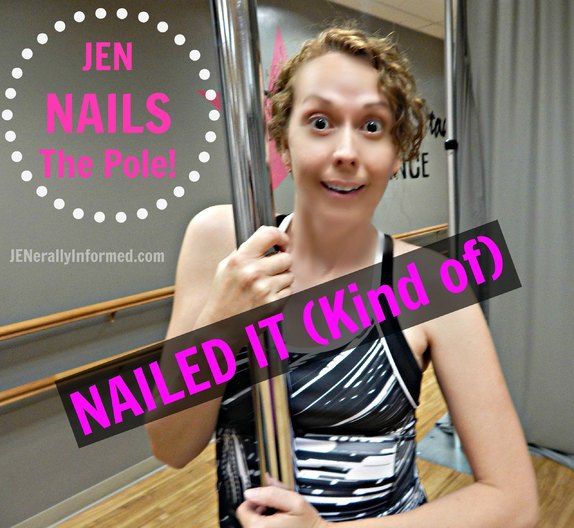 Just so you know, after class and feeling on a pole high, I took a well deserved QT BIG Q Freezoni break! 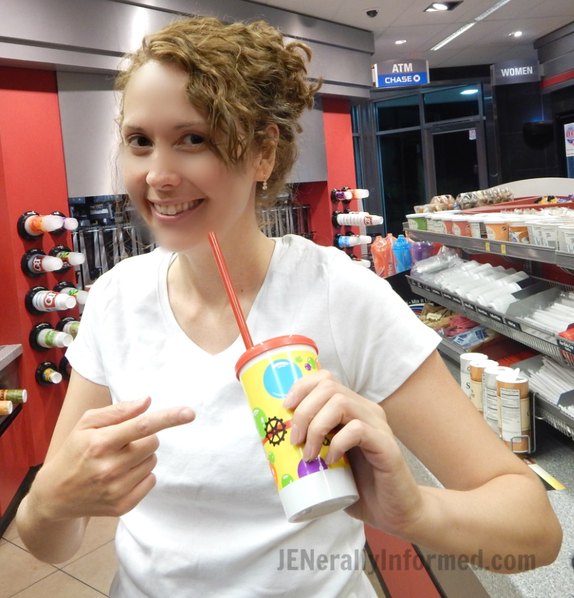 Post class Update: Remember when I mentioned that I could tell my core was out of shape?  It is 2 days later and my stomach feels like it would after completing about 100 crunches and I can’t lift my hands over my head, but it was all worth it and I think I am going back for more!