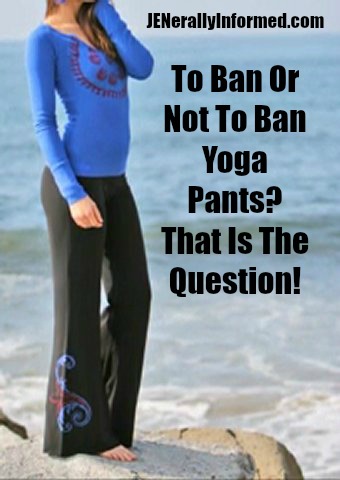 It has been well established that I am a big fan of stretchy yoga pants.

There have been many a day where I have both began and ended my day wearing them with no change up in between.

I’m going to be straight with everyone. I don’t do yoga. I’m not against yoga, as a rule, it’s just that I don’t trust my flexibility to bend rather than break. On the other hand, being a full time mother is also a full day workout. My youngest is a 20 pound kettle bell that I have to also feed.  Just this morning I did the 50 yard trashcan sprint after hearing the trash truck further up the block and realizing that my trash receptacle wasn’t out to the street. Today may have been a personal best.

Long story short, mothers have earned the right to wear yoga pants, regardless of their skill with “Downward Dog.”  I’m pretty sure that there are millions more just like me.

Now this beloved of most fashion choices has come under fire by one lawmaker. Rep. David Moore of Montana sponsored a bill last week against “indecent” clothing, suggesting that “yoga pants should be illegal in public.”

Did I not just explain how millions of women wear and love them?  I guess my experience with yoga pants has been pretty benign.

Sure my favorite pair has a little hole in it, but really that is not indecent!

So armed with my righteous indignation I exercised my Google Fu, to make sure that Yoga Pants were being worn responsibly:

My first entry was “Girls in Yoga Pants”. Let’s check in with that!

Are you serious? I thought the whole point of Yoga Pants was to be comfortable. What I was seeing didn’t look all that comfortable!I had to tell the 10 year old boy eating breakfast over my shoulder to look away.Probably not one of my better parenting moments.

OK, so perhaps girls in yoga pants like THAT might be considered indecent, but what about all of the millions of other women who do NOT abuse the privilege?

Clicking to the next page didn’t improve things at all. “C’mon, those aren’t even really PANTS. Not in the traditional sense!

So while the internet was not helping me make my case, I am still holding strong to my pro- yoga pants stance. If America bans yoga pants, the Communists have already won. . .

If Americans ban #yogapants the Communists have already won @queenmomjen

<Pause for a Fact Check>

Jensguy who actually lived in Russia, claims that Russian women have been wearing these types of leggings for decades at the very least, easily back into the Soviet Union Days.  He does submit that there is a good chance that many of these leggings were made of wool, which isn’t really selling right now here in ‘Murica.  Also, they might have been called ballet pants. . .

I’m kind of concerned that Jensguy is touting himself as some kind of yoga pants historical expert.  The upside, however, is that there is no causal relationship between Communism and the lack of yoga pants.

All right, enough with the internet searches. I decided it was time to hit Facebook with this important discussion on yoga pants!

I asked Jensguy (mostly to give him something useful to do that didn’t involve laughing at me, or researching yoga pants pictures on Google himself) to please post on his Facebook wall the following question:

“OK, the wife is writing a blog article on the controversy and suggested banning of  yoga pants. She needs feedback, yay or nay. OK, Go!”

What resulted was a hilarious comment string involving MANY people. Here’s some of the best:

“They can only ban them if they also outlaw low riding see your butt crack pants for men!”

“It might be  a whole different discussion if men wore them everywhere.”

<Interesting to note, I also learned via this discussion that Oklahoma is also considering banning yoga pants.>

Other Guy named Bobby- “Washing mine out right now. You gotta be clean. I only wear them out in public…”

Sheesh people I need you to help me out here!  At this point I am almost feeling like I may need to scrap this post and move onto the merits of wearing caftans or mumus. 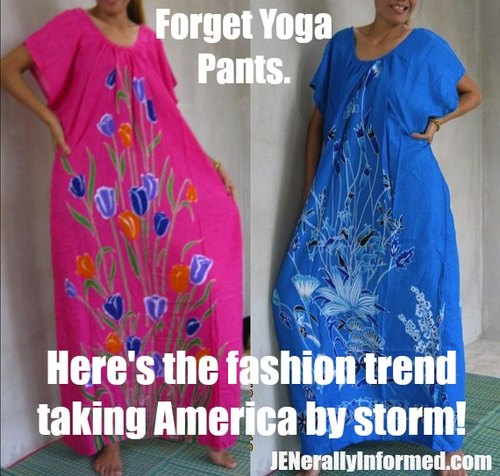 Nope, THAT is not happening!

Because guess what? I typed this entire post wearing yoga pants, with a brief intermission at the Library for baby story time. I would also like to point out that I sat in this story time with no less than 8 other mothers who in solidarity also wore their yoga pants!

I submit that yoga pants aren’t going anywhere! Try as you might lawmakers, here’s what American women have to say to your futile attempts!

We will wear our yoga pants at the zoo.

We will wear them at the library too!

We will wear them here or there.

We WILL WEAR THEM ANYWHERE! 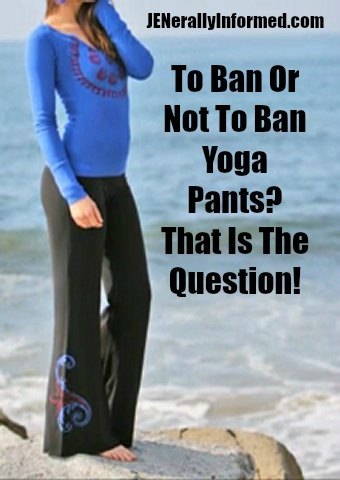