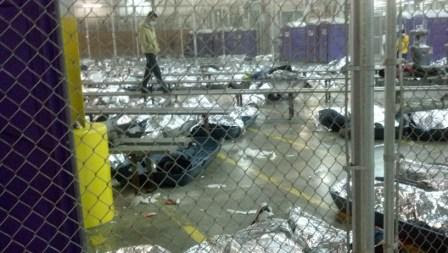 I picked the name “JENerally Informed” for my blog for a very specific reason, so that I could blog about whatever story or activity I wanted to. I did have other plans for another post to share with you today, but when I heard about this story I thought Nope this is what I want to blog about today. It’s important and necessary to take notice of news like this, but let me warn you it is not pretty. I’m not sure that this news has really filtered out to the rest of America as there is hardly any credible news articles to pinpoint or direct people to, but here in Arizona we are dealing with a humanitarian crisis and it involves children.

In the small border town of Nogales, Arizona, about one hour south of  the city where I live with my family, we have received news that children from South America are being transported to and housed in a government holding facility by the federal government.  Here are some pictures from a local media member, Jon Justice at KQTH, who was given these images by a person working at the facility who wanted to show everybody what is happening there. He has given me permission to run the photos. 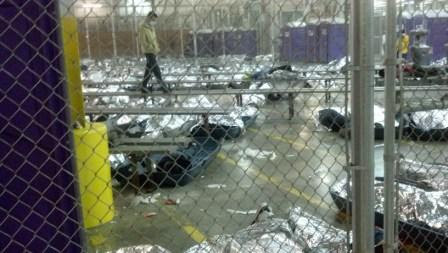 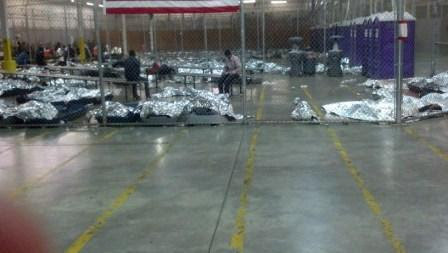 In the pictures you can see the “solar” blankets used by FEMA for emergency situations like flooding, fires, and earthquakes. This is all that is available to the children at this point. More children have been bussed in since the pictures were released and reportedly there are almost one thousand children behind the chain link fence.

Who are these children?  They are mainly children from South and Central America from countries other than Mexico.  Most of the children have been picked up in Texas where border patrol officers are currently being overwhelmed and the children are now being shipped to Arizona because all of the holding facilities in Texas have filled up.  A consul for Honduras, based in Arizona visited the site and said that the children at the facility are sleeping in plastic containers, haven’t showered for up to 10 days, and include pregnant teens and a 1-year-old suffering from diarrhea.  The children cannot be simply sent back across the border as that would violate Mexican immigration law.  It is official policy to release the children only into the custody of their parents who are not in the country and cannot be contacted. 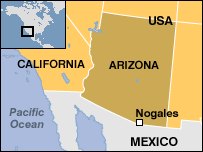 How did they get here unsupervised?  That is the question I have not been able to get a firm answer for.  Apparently there has been a rise in children crossing the border unaccompanied for the last couple of years, especially in the Texas sector.  A rumor has been spread that if you can make it through Mexico to the US border with children, it is almost a “get in free” card.  This isn’t the case, but this misunderstanding has been promulgated by human traffickers who are making a lot of money transporting children and families through Mexico to the US border.  Interestingly, Mexico’s own immigration laws are very strict and while they might let traffic move from South America through Mexico, those immigrants aren’t allowed to tarry on the way and certainly aren’t allowed to return to Mexico once they cross into the US.

Update-  As I sought clarification I was informed that the official Border Patrol Policy is to turn away illegal entry at the border, unless they are children.  At that point they are required to take the children into custody.  Quite simply the unaccompanied children are actively seeking border patrol agents and turning themselves over once they cross the border.   Also, according to an article from NBC Latino, the specific law that the traffickers are using to advertise in South America that children will be admitted into the country is the Trafficking Victims Protection Reauthorization Act which was passed and signed into law in 2008 by George W. Bush.  Obviously this has accelerated over the past year.

What is being done at the site?  Humanitarian efforts are being attempted outside of the rudimentary aid provided by FEMA.  Homeland Security has reportedly ordered 2000 mattresses.  Local organizations in Nogales and the surrounding communities are collecting clothes and blankets to help care for the children.  The state of Arizona is rushing supplies into the facility and is constructing showers and providing needed medical supplies as many of the children are health risks to themselves and others.

Update-  There have been some ecclesiastical leaders allowed into the site, along with the mayor of Nogales, but as of yet the media is still heavily restricted.

What is the plan?  This has been a sore spot as there hasn’t appeared to be a lot of planning in the process.  A week ago President Obama declared the overwhelmed border and unaccompanied children an “urgent humanitarian situation,” and little has been said since inside or outside of government.  As a communications specialist it really upsets me when the media goes mute on stories like this. People that could help aren’t being notified of when or where transfers of the children are taking place, and the community has largely been frozen out of information.  Understandably this is a crisis, so there will be some mistakes as we feel out the situation.  On the other hand, if this truly is an “urgent humanitarian situation.”  then we need transparency and accountability from all levels of government dealing with the problem.  There are thousands of children effectively homeless and without family right now and this is NOT acceptable.

What can we do?  Call your Congressperson or Senator’s office and let them know you are paying attention to this situation.  Obviously, here in Arizona our elected officials of both parties are aware of the issue and are closely monitoring it, but I’m not sure that anyone else is really following this right now.  There will have to be Federal help at some level, so it is entirely appropriate to contact YOUR local rep.  It will become necessary for more holding facilities to be opened in other states, as this will affect more communities.  Let others know what is going on and encourage them to also contact their officials. As far as contributions or places to send extra clothes, there is nothing concrete set up yet. Sometimes the first to jump in are a little shady, but  I will continue to inquire and let you know if I can find a place that is directly supplying aid on an ongoing basis.

**** After this post a large online blogging collaboration BlogHer/ She Knows invited me to write about a border tour I went on with ranchers living in the area. You can read the story here.